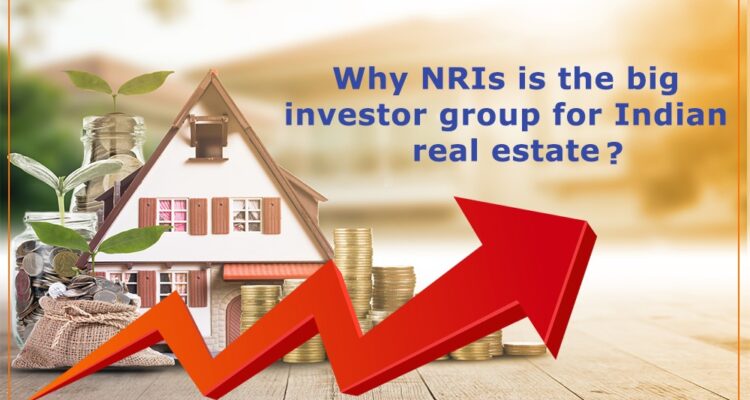 The real estate market investment Driving force behind the steady growth of dollar against the rupee. The steadily depreciating value of the rupee, though it does not augur good for imports, has ensured that NRIs find it more lucrative to invest their forex earnings in India. Every dollar invested by an NRI in India has now greater returns in terms of the rupee.

The Real Estate (Regulation & Development) Act, 2016 has restored the faith of homebuyers, particularly NRIs, in the property market in India.Ensuring greater transparency and accountability apart from a clear timeline for delivery of projects to investors, the Act has been very crucial in the growth of NRI investments in the country. Those settled outside the country are assured of a government mechanism to keep track of their investments in the property market and proper redressed of their grievances, if any, in a time bound manner through the various provisions of the Act.Nearly half of the investments in real estate are being made by NRIs settled in the Gulf countries, including Saudi Arabia, UAE, Oman, Kuwait, Qatar and Bahrain. Investments have also been coming from North America, including Canada, as well as from certain European countries and the East Asian nations of Singapore, Malaysia, Japan and Korea.

And investments are not only being made in Tier 1 metro cities in India that are replete with civic and commercial amenities, but also in fast-expanding Tier 2 and Tier 3 cities. Investments in Tier 2 and Tier 3 cities like Jaipur, Pune, Bengaluru, Bhubaneshwar, Hyderabad and Kochi can be attributed to the NRI instinct of hedge against the future: most NRIs aspire to return to their hometown at some point of time instead of permanently settling abroad. Tier 2 and Tier 3 cities have also witnessed rapid growth in infrastructure over the past few years with a maze of highways, expressways, metro networks and air connectivity routes linking them to the major cities of the country.

The NRIs Investing in housing & commercial real estate.For the NRIs, the options for investment are no longer simply limited to residential projects. There has been growth of malls, retail spaces, market complexes and shopping plazas adjacent to the recently developed housing hubs for meeting the daily needs of residents. The commercial real estate space is also proving to be lucrative for investments by NRIs. Commercial units, as compared to residential projects, offer greater value for money.